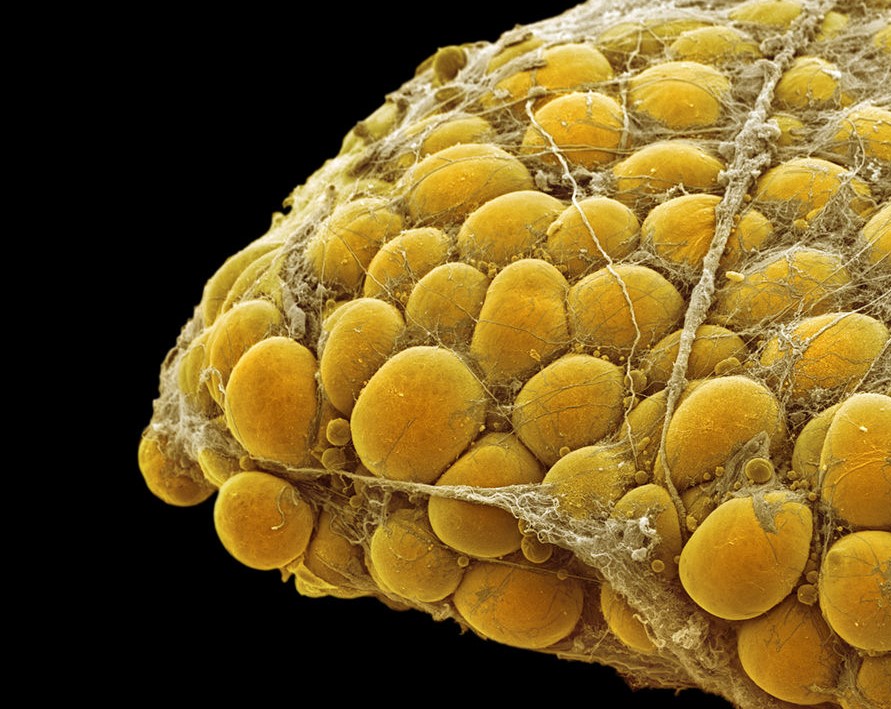 Probably the most important nutritional problem in today’s society is obesity.

Now, what is obesity? Essentially obesity is having too much fat in your body.

Now, what is body fat? Body fat is composed of adipocytes or fat cells stored in adipose tissue in the first place.

Adipose tissue has several functions, and a significant one is that it acts as a heat or a cold insulator, depending on how you look at it.

Individual animals must endure freezing temperatures as they have a thick layer of fatty tissue to keep them warm. Typical examples would: be a seal or a polar bear.

We also have a layer of fat, but we don’t need to keep ourselves warm because we carry clothing or have central heating. So this adipose tissue function may be necessary for individual animals, but it has lost most of its appeal for us.

The second and crucial function of adipose tissue is that it acts as an energy storage depot, and we all can recognize that when we overeat energy, the excess gets stored in the fat tissue.

The storage of fat was significant in the past. In prehistoric times when people suffered from long periods of famine, they needed to effectively store food as a readily available fuel in the form of fat tissue. And then, during periods of starvation, they could recruit and mobilize the fat and use it to do their work and activities.

Nowadays, food is available everywhere. We don’t need to stuff ourselves during a specific year period to help us survive the winter. So this means that the energy storage function of fat tissue has become a lot less critical in the current human being.

The ability of adipose tissue to produce hormones is vital as they help the adipose tissue communicate with the rest of the body, for instance, in regulating food intake. Interestingly, most problems that arise in people with very little body fat are not because they don’t store fat but because the production of certain hormones is disturbed.

Now, let’s take a closer look at a fat cell. Fat tissue is composed of fat cells or adipocytes that are very peculiar. And their main feature is a colossal lipid droplet. Also, it contains the essential organelles that other cells carry, such as nuclei and mitochondria. They are very much pushed to the outside and are an efficient energy storage cell in the body.

How does fat get into these adipocytes in the first place?

So let’s start with the consumption of a fatty meal. We saw that the fat in our diet is processed in our GI tract and put into specialized particles called chylomicrons. Then, they deliver fat throughout the body. And it mainly goes towards two organs: the muscle and the fat tissue. And these two organs are characterized by the presence of a specific enzyme called lipoprotein lipase. Lipoprotein lipase breaks down the triglycerides in the chylomicrons, allowing the fat taken up into these tissues.

And most of the fat that you consume will be sucked into your muscles to be used as fuel. On the other hand, if you decide to sit on a couch and watch a movie, you’ll store most of the fat because the lipoprotein lipase in the fat tissue will be most active. So that’s how fat gets stored in the adipocytes.

Fat ~ Going In and Out of the Cell

What we see if you look throughout the day is that a fat cell constantly switches from being a net consumer of fat to being a net releaser of fat. So if we start in the morning, when you wake up and your stomach is empty, you rely on your internal fat storage to mobilize energy to allow you to function that serves as an energy source.

Ok, now, total fat mass is determined by the number of fat cells and the size of the individual fat cells. This means that the size of a fat depot can increase because of two reasons:

In most people, the number of fat cells remains constant throughout adulthood.

That means moderate changes in fat mass mainly occur via changes in the size of the individual fat cells. So this means that the fat cells expand when you gain weight and shrink when you lose weight.

We also know that a fat cell’s average lifespan is about ten years. And after those ten years, a fat cell is renewed. So when we lose fat cells, we also gain them, called fat cell turnover. At the same time, the content of the fat section is renewed much more quickly at a rate about six times faster.

Now I’ve talked to you about white fat and white adipose tissue (WAT), but there is another issue that I haven’t addressed yet, which is called brown fat.

Brown fat exists in certain mammals. Brown fat is involved in a process that we call cold-induced thermogenesis. It means that the tissue can produce heat and especially during the cold, so it allows the animal to keep itself warm by a process that is called chemical uncoupling.

Similarly, to do the process mentioned above, brown fat needs a lot of mitochondria, which are abundant in brown fat cells. And another difference between brown and white fat cells is that it doesn’t contain one large lipid droplet but multiple smaller lipid droplets.

Now brown fat is abundant in many species, including hibernating animals and cold-adapted small animals such as mice and rats. And it is activated when these animals are exposed to the cold, producing heat and allowing the animal to keep itself warm.

Now, I am telling you about this because, for several years, we thought brown fat was not particularly important for adult humans, but this all changed in 2009. Many papers published together in the New England Journal of Medicine showed that adult people do contain brown fat.

The technique called PET-CT scan discovered brown fat. With this technique, you monitor the uptake of radioactive glucose in different tissues of the body. They say that when these people were cold, they saw certain areas of the body light up and realized after a while that this represented glucose uptake into these brown fat cells.

Since then, this whole field has exploded because people have realized the potential importance and impact of this finding, and it means that people could lose weight

by stimulating the heat production in the brown fat cell. It all depends on how crucial brown fat turns out to be in humans; at this point, we don’t have the answer yet. But the results we have so far are quite promising. Researchers also found that obese individuals seem to have less brown fat!

So, in summary, what I have told you is that fat tissue is vital. That has several functions, including insulation, energy storage, and an endocrine, hormone-producing organ. We have learned about how fat gets stored in the adipose tissue. And we have known how it is mobilized and undergoes a constant switch throughout the day. And in the end, I have told you about a new type of fat called “brown fat.” That has excellent promise as a future target potentially for obesity!